Availability: Out Of Stock

Joyetech EX series Coils for D22 Tank are also available in different options as well, which can be found here

Note: HTML is not translated!

Enter the code in the box below: 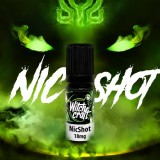 Nicshots are unflavoured e-liquid, they ...

This flavour will remind you of candy ra...

A sweet blueberry flavour with a hint of...